Sue Mehrtens is the author of this and all the other blog essays on this site. The opinions expressed in these essays are her own and do not necessarily reflect the views or opinions of other Jungian Center faculty or Board members.  Honesty, as well as professional courtesy, require that you give proper attribution to the author if you post this essay elsewhere.

Carl Jung and George Land on What’s Really Going On

“In order to characterize it [the arc of life] I must take for comparison the daily course of the sun – but a sun that is endowed with human feeling and man’s limited consciousness. In the morning it rises from the nocturnal sea of unconsciousness and looks upon the wide, bright world which lies before it in an expanse that steadily widens the higher it climbs in the firmament…. At the stroke of noon the descent begins. And the descent means the reversal of all the ideals and values that were cherished in the morning.” [1]

“… one cycle actually overlaps another. A new phase one (formative phase) begins during phase three (mutual phase) of the previous cycle,…”[3]

“Societally, we feel the pressures of integrating long-ignored portions of our population – women, minorities, handicapped. As part of an emergent world community, we experience the impact of the reality that we are all in this together, that every incident on the globe affects each of us in a very personal way. Together we can create either the possibility of nuclear annihilation or the opportunity for successful interdependence.” [4]

In our Jungian Center course on aging, I discuss Jung’s concept of the arc of life. As the above quotes describe, Jung used the daily transit of the Sun through the sky to describe his sense of how we are born (sunrise), grow (mid-morning), come to mid-life (noon), and then gradually age (mid-afternoon), and die (sunset). I hand out (or screen-share on Zoom) a graphic illustration: 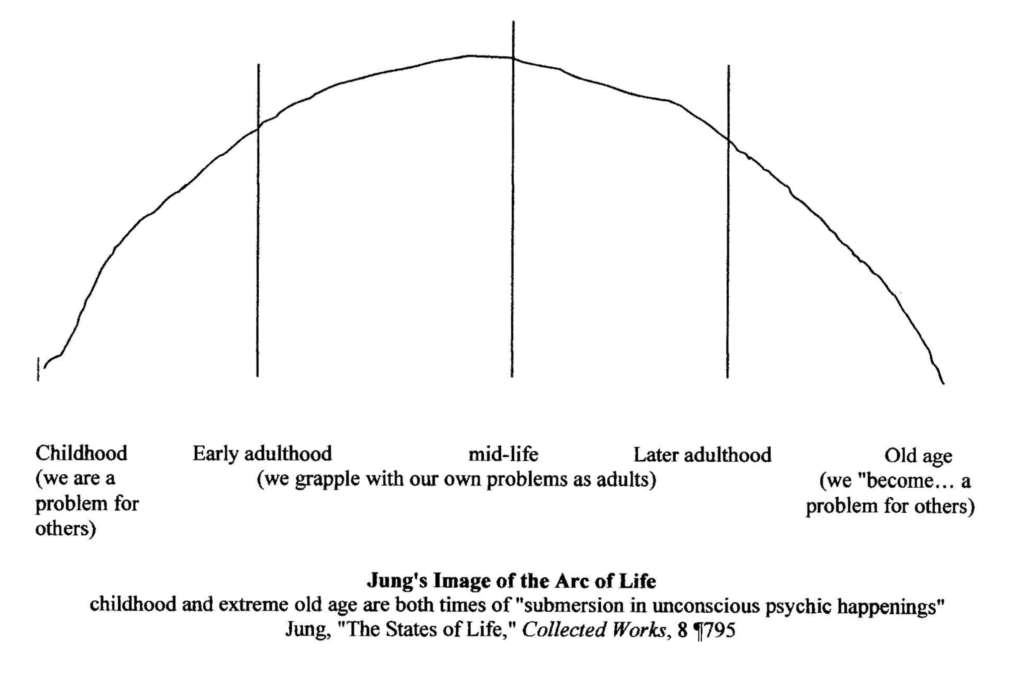 Jung explains this diagram in “The Structure and Dynamics of the Psyche;”

“In conclusion I would like to come back for a moment to the comparison with the sun. The hundred eighty degrees of the arc of life are divisible into four parts. The first quarter, lying to the east, is childhood, that state in which we are a problem for others but are not yet conscious of any problems of our own. Conscious problems fill out the second and third quarters; while in the last, in extreme old age, we descend again into that condition where, regardless of our state of consciousness, we once more become something of a problem for others.”[5] 8-795

Jung’s focus always was on the individual, so this illustration depicts our personal life path. Recently, as I thought about possible courses for future terms at the Jungian Center, I dug out this illustration, and then recalled a similar diagram I had written about years ago, in an early version of my memoir, Dreaming to Wake to Life.

That diagram had not one but multiple arcs, because it describes the growth path not only of families but also of collectives, societies or civilizations:

This diagram was the brainchild of George Land.[6]

George Land was a 20th-century futurist and business consultant who had the good fortune to be self-taught: by not going to college, he never experienced the “training into orthodoxy”[7] that can blinker or twist the perception of the highly educated. As a result, Land was an original thinker who came up with significant insights and theories.

I was introduced to George Land (literally and then through his writing) in 1988 while I lived in the Bay area and worked with Willis Harman. In his book Grow or Die, Land explicated his theory of growth curves. This theory derived from his deep study of how living things grow–the patterns that manifest in cells, plants, animals, humans and societal systems–and how generations of life forms create curves that overlap.

We all know this: Most of us have had the experience of grandparents (some, given the lengthening of life spans in the last few decades, many have great-grandparents, even great-great-grandparents).[8] This overlap is essential, because, as Jung’s diagram points out, we come into life as vulnerable babies (“a problem for others”) and mature into old-old age (“as a problem for others”), and so we need this overlap of generations to survive.

We are born vulnerable and in need of lots of support and care, but slowly we grow, under the protection of our parents, grandparents, aunts and uncles and other older people. This tutelage interval is represented by the oval shapes in Land’s diagram above that are formed by growth curves meeting. The tiny dots represent birth, and the point where two curves meet mark the time when we have become adults.

As in Jung’s diagram, the arc at this point is upward: we are moving out into the world, establishing a career, and forming a family. The birth of children marks the beginning of the new generation, represented by the next growth curve.

The downward line represents maturation into old age, the time when strength and senses begin to dim, perhaps even to fail. Eventually the curve ends: we die. Genealogical research is essentially the process of identifying the numerous growth curves of our ancestors.

Where Land’s concept gets interesting is in how he applied it to the collective.

Land recognized that, just as individuals begin life, grow, mature and die, so do collective organizations and cultures. Land hypothesized that a major new growth curve began in 1776 A.D., marked by the American Revolution and the Declaration of Independence. He felt that event, and the document that articulated a set of ideas, established a whole new growth curve for the world, the apogee of which occurred in the late 20th century.

As the “nations” growth curve matured, a new curve began in the 19th century, taking the form of a reaction to the rationalism of the 18th century Enlightenment. It was what Jung termed “the real heyday of spiritualism,” full of “tableturning epidemics” and spiritualistic séances, infamous mediums and materializations of bodies out of thin air.[9] Jung saw this widespread interest in things spiritual as compensatory to the simultaneous growth of scientific materialism which began to make serious changes in American and European societies, with inventions like the railroads, the telegraph, industrial factories, and mass-production.[10]

The new global growth curve never lost its early orientation to Spirit, spirituality and higher consciousness. It developed in the 20th century into the “New Age” movement, and drew upon a truly global heritage for its worldview and values. Hence the growing interest in yoga, Buddhism, and the heritage of  Indigenous cultures, as well as the 2012 A.D. date, which is part of Mayan cosmology.[11] George Land knew the Mayan prophecy about that date. In Land’s system, 2012 was when the old nationalistic curve met the curve that started in the mid-19th century. The former was on a downward trend, the latter gathering more and more strength and adherents to its humanitarian, ecological, egalitarian worldview.

The diagram does not continue the old nations curve as far as it should: this growth curve is still very much with us and there are still billions of the Earth’s population who live enmeshed in its nationalistic, jingoism, nativistic, racist, sexist, materialistic and exploitative worldview which could, if maintained much longer, lead to an uninhabitable planet. Jung warned us about this:

Perhaps one reason we have witnessed so much blatant lying in recent years is that some people are still trying to live “the program of life’s morning,” i.e. the values and viewpoints of the old, dying growth curve–an effort that can only be sustained by lies and delusions.

It is important to note the bifurcation: As the new curve rises more and more, the old curve is faltering, falling, eventually to come to an end. Meanwhile, the people living on the two curves are coming to be farther and farther apart. Land’s concept can give us insight into why we are witnessing so much polarization: The two populations are living two increasingly-different realities.

What is really going on now? Pundits will point to the Republicans’ quest to protect the white, Christian, patriarchal system. Others will address economic issues, and the elites’ quest to maintain the neo-liberal laissez-faire system. Still others point to demographics, and how minorities will soon become a majority in the United States. All of these (and many others) are valid features of our current reality, but they all are epiphenomena of the deeper fact that two tracks are operative at the same time: the old growth curve being defended primarily by old white men, and the new, being promoted by younger people and progressive elders.

Visionary futurist that he was, George Land offers us some valuable guidance when he noted that

“Societally, we feel the pressures of integrating long-ignored portions of our population – women, minorities, handicapped. As part of an emergent world community, we experience the impact of the reality that we are all in this together, that every incident on the globe affects each of us in a very personal way.”[13]

And Land reminds us that we stand now at a choice point:

Together we can create either the possibility of nuclear annihilation or the opportunity for successful interdependence.”[14]

Both Land and Jung would have us seize the opportunity to recognize our interdependence.